As reported in Nanyang 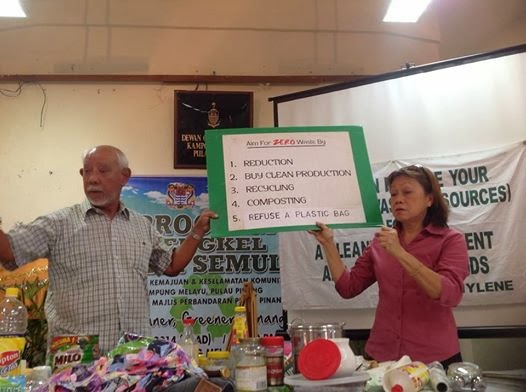 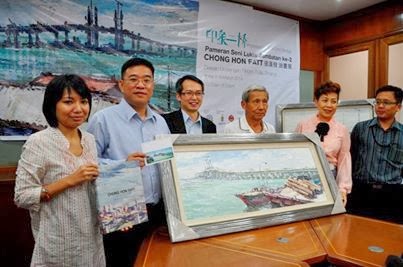 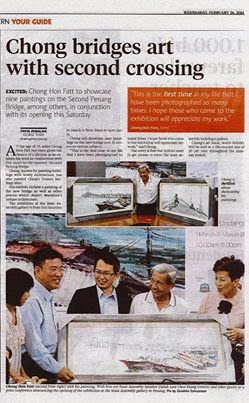 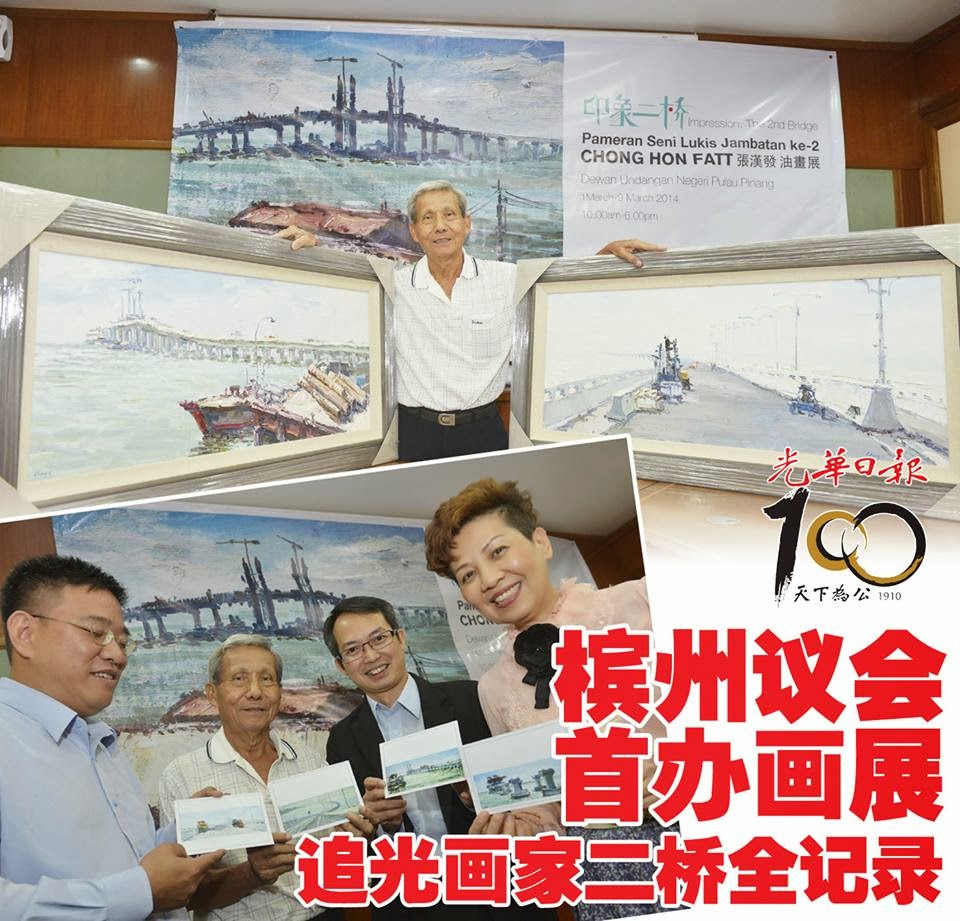 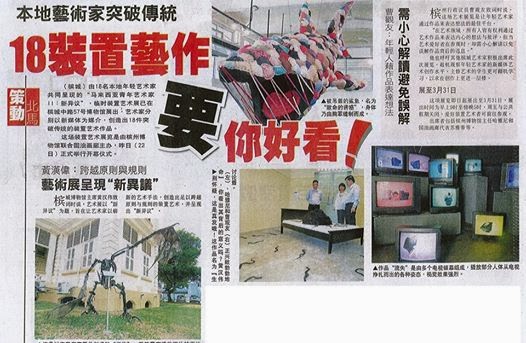 出席者包括檳州博物館主任哈雅尼和國油畫廊代表蘇雅蒂等。（星洲日報‧大北馬）
Posted by Wong Hon Wai at 6:40 PM No comments: 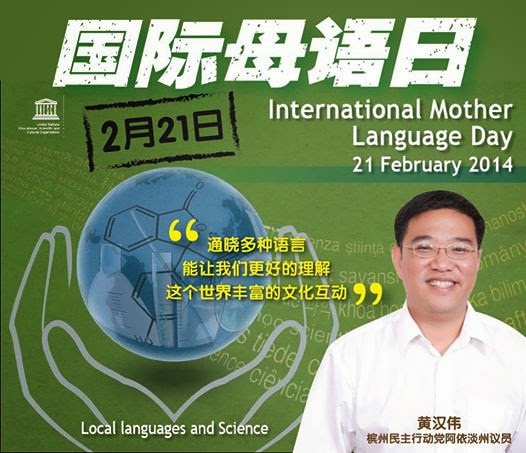 A good comment by Hazlan Zakaria of The Ant Daily

QUICK TAKE: As it hit out at the Penang government’s SMS blast plan to directly communicate with Penangites, Gerakan Youth may have forgotten that the BN did the same thing during GE13.

The ruling party sent unsolicited SMS messages that have frustrated mobile phone users when they received a barrage of unwanted spam from BN candidates, then standing in their constituencies.

Indeed the Prime Minister’s Office itself had taken liberty with sending holiday wishes and other missives to the public using targeted SMS blasts, on the behalf and by all portends at the behest of Prime Minister Datuk Seri Najib Razak.

Given the above, it is hypocritical for a BN component to condemn the Penang SMS blast plan.

Tan’s memory may need a little “reboot”, and his knowledge of the law refreshed, despite the fact that he is a lawyer by profession.

Anyone who bothers to check will see that Section 3 (1) of the Act says, “This Act shall not apply to the Federal Government and State Governments.”

As long as the data involved is not used for commercial purposes, there is no abuse. That was part of the argument justifying the BN’s and PMO’s use of the same facility.

Tan was criticising the Penang government’s agreement, reportedly inked with mobile operator XOX Bhd last week, to facilitate an SMS blast capability for the state authorities to communicate with Penangites.
The deal was apparently for the firm to facilitate up to 2.27 million text messages a year for the government, though reports indicate that the state would not be paying a dime as it is part of XOX’s corporate social responsibility programme.

An online portal reported Penang backbencher chief Wong Hon Wai as saying that the state would focus on disseminating useful and urgent information like natural disasters, utility disruptions and road closures, instead of festive greetings it sent previously.

As reported in Malaysiakini by Susan Loone

Gerakan Youth is not impressed with the Penang government's move to send out ‘SMS blasts’ for instant communication with citizens.

In a tweet, Youth chief Tan Keng Liang (left) suggested that Chief Minister Lim Guan Eng may not have realised the existence of the Personal Data Protection Act, which protects the privacy of mobile phone users.

But does the ‘SMS blast’ constitute invasion of privacy?

"The Personal Data Protection Act is to regulate commercial activity by, for instance, banks and communications companies, so that they do not release personal data to third parties," explained Wong Hon Wai, who heads the Penang state assembly’s Backbenchers Club.

"According to the preamble, the law is only to control commercial activity. Section 3 of the Act states that it doesn't cover the state or federal government. From the legal aspect, the state government can send (text-messages without) any legal implications.”

Wong (right), also a lawyer, was responding to criticism of the state government's deal signed with mobile operator XOX Bhd on Feb 12 to send out 2.27 million text-messages a year.

Lim said the state would be saving RM180,000 as XOX is not charging the Penang government for the service, as this is part of its corporate social responsibility programmes.

Wong said the company will abide by the law and that it cannot use the data provided by the state government for commercial purposes.

He also said all governments gather personal data through various methods, giving the example of the New York City Office of Emergency Management which disseminates useful and urgent information via text-message.

Whenever natural disasters happen or if there is disruption of water or electricity supply or problems with road conditions, the authorities can send a SMS to inform citizens, Wong explained.

‘Worry will be addressed’

Wong said the state government had previously sent festive greetings via text-message to Penangites, but noted that the focus should be on more useful information.

As examples, he cited situations such as low water levels in dams during the dry season or the closure the Penang Hill train station for maintenance work.

Wong said SMS is still the most common communications tool for most people, given that they would need smartphones to access messages via Facebook and Twitter.

He said the state government is aware of the people's worry that the service, although free of charge now, may involvement payment when the year is up.

"I believe the state government will see (to this). After all, technology normally lasts only for three to five years. There may be new and more effective technology available in the future," he added.
Posted by Wong Hon Wai at 9:41 AM No comments:

As reported in Sinchew Jit Pao

As reported in Malaysiakini by Low Chia Ming 刘嘉铭

“而且，科技的东西可能只维持三五年，之后就出现其它更有效的新管道。”
Posted by Wong Hon Wai at 8:07 PM No comments:


As reported in Oriental Press

今日出席者有檳岛市议员穆哈默沙比里、檳岛市政局工程部副主任拉贞德、道路工程师丘运良及官员再祖丁。
Posted by Wong Hon Wai at 11:16 PM No comments:

As reported in Buletin Mutiara As reported in Guangmin Daily

GEORGE TOWN (Feb 10): A heavy forest fire has hit Penang island with flames raging on a hill at Paya Terubong from about 6.30pm today.

State fire and rescue services squads are currently in the process of combatting the flames that could have possibly have come about due to the current dry spell in weather.
A state fire and rescue service department official confirmed that the fire was limited to the hilly forest area of Paya Terubong, and that there was no danger to any property.
However, the giant plumes of black smoke, as well as orange glow of the fire, were visible from several parts of Penang, causing some concern among residents.
Ash from the flames have also been felt in nearby areas around the hill.
A check by fz.com at 10pm found that the fire had appeared to have significantly abated.
However, the odour of burning – reminiscent to the haze Malaysia experiences due to forest fires in the region – was extremely strong in the air in many parts of the north-eastern side of the island.
Ashes from the fire had also reached residential places like Batu Lanchang, Gelugor, Seri Delima and Ayer Itam.
When contacted, Air Itam assemblyman Wong Hon Wai said the fire-fighters were facing difficulty as the flames were at high altitudes on the forested hill, making it quite impossible to access by foot in the dark.
“There is no access up the hill,” he said.
He also stressed that there is no cause for alarm, saying that it was a “bush-fire” and not a “forest-fire” as reported.
State Fire and Rescue Services Department Director Azmi Tamat is expected to hold a press conference during the department’s annual assembly at its state headquarters tomorrow morning.
Posted by Wong Hon Wai at 10:57 PM No comments:

New pedestrian crossing in the works to keep pupils safe

New pedestrian crossing in the works to keep pupils safe

THE Penang Municipal Council (MPPP) plans to set up another pedestrian crossing in front of Batu Lanchang Primary School for the safety of all concerned.

This will be the third pedestrian crossing along the road with the first two located in front of Chung Ling High School and SMK Georgetown.

Air Itam assemblyman Wong Hon Wai said that the traffic at Lorong Batu Lancang was always heavy in the morning and evening.

“There are four schools located there and the road also leads to the Air Itam township.

“The purpose of setting up another pedestrian crossing in front of Batu Lanchang Primary School is to ensure the safety of the pupils and parents,” he said on Wednesday.

He was speaking after visiting the road widening project involving a 750m stretch of the road where Lorong Batu Lanchang meets Jalan Masjid Negeri.

Wong also said that the project was 23% completed and it should finish by July 18.

“Besides the two lanes, an additional 2.5m lay-by will also be constructed for parents to pick up their children without disrupting the entire traffic.

“The lay-by will begin from the vocational school (SM Teknik Batu Lanchang) up to the junction where it meets Jalan Masjid Negeri,” he said on Monday, adding that motorists waiting along the road for their children after school had been causing traffic congestion. The road widening together and the lay-by would be able to reduce congestion.
Posted by Wong Hon Wai at 10:46 PM No comments:

Call for state to be more old folk-friendly

Call for state to be more old folk-friendly

THE Penang Senior Citizens Association has urged the state government to have more pedestrian crossings complete with traffic lights and more walkways for the benefit of old folk.

Its president Lawrence Cheah (pic) said this would help prevent accidents as well as help make Penang an ideal place for senior citizens.

He commended the state government and state tourism board for their consistent efforts in making Penang one of the most vibrant cities in the region.

Cheah was speaking at the association’s Chinese New Year open house at its premises in Jalan Sir Hussein on Sunday.

Air Itam assemblyman Wong Hon Wai, who was the guest of honour, said all government agencies needed to adopt polices which are senior citizen-friendly.

He said the average life expectancy for men in Malaysia was 71.4 years while it was 76.2 years for women.

Wong handed over a card to Cheah at the event to mark the presentation of office equipment to the association.

The equipment was bought using RM2,500 from Wong’s constituency allocation.
Posted by Wong Hon Wai at 11:13 PM No comments: 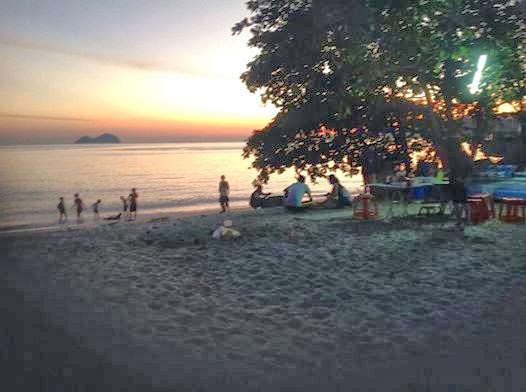 州政府海洋政策必须出台，保謢海洋资源，解决污染奌，让全民熱爱自然，多么全民就会監督就会守护环境。
Posted by Wong Hon Wai at 10:33 AM No comments:

As reported in China Press 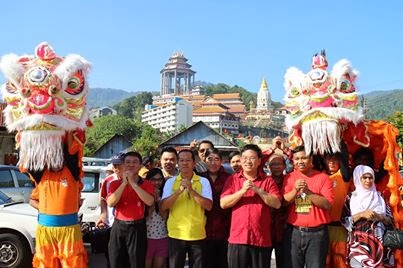 
As reported in Oriental Press

他说，一旦建好缆车后，民眾可以在现有的停车场，直接乘坐缆车上极乐寺。有关缆车已开始动工，若一切顺利，將在未来两年內完成。
Posted by Wong Hon Wai at 10:20 AM No comments:

THE construction of an inclined elevator for visitors at the Kek Lok Si Temple in Penang is expected to start after Chinese New Year.

“The elevator and the car park will help ease traffic con- gestion in the area, especially during festive seasons,” Wong said at a press conference during his visit to the Air Itam market on Monday.

“The roads in the Kek Lok Si Temple area are too congested and small.

“I hope that with the inclined elevator and the car park, the congestion will be better managed.”

Wong said he had received complaints from residents in Jalan Pokok Ceri about cars parked in front of their houses.

“With the car park, things will improve,” he said.

Wong noted that the roads leading to Air Itam were less congested during Chinese New Year this year compared to the previous years.

He said this was thanks to the proactive measures taken by the state government.

“We have been trying to ensure smooth flow of traffic.

“The road widening projects in Lebuhraya Thean Teik and Jalan Masjid Negeri have helped with the traffic flow in Air Itam.

“In addition, a volunteer patrol unit is stationed at night at roads leading towards the Kek Lok Si Temple to assist police in controlling traffic.

“Also, under Ops Payung, Penang Municipal Council enforcement officers are stationed in the Pekan Air Itam area to ensure that the cars are parked in the designated places and do not obstruct traffic,” Wong said.

A total of 200 parking spots were created this year at Pekan Air Itam to improve the parking situation in the area.